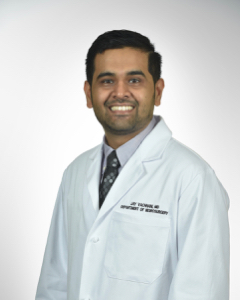 Dr. Jay Vachhani is currently a neurosurgery resident in the Department of Neurosurgery at the University of Illinois College of Medicine in Peoria.  He began his undergraduate training in the Honors College at the University of South Florida.  Under the mentorship of Emanuel Donchin in the Department of Psychology, Jay got his first taste of research working on a variation of a system called the Brain Computer Interface.  This apparatus was designed for patients who are locked in due to syndromes such as ALS to communicate through the measurement of specific EEG waves called event related potentials.  Jay was also heavily involved in the BioMedical Ethics Society at the University of South Florida and helped host the first BioMedical Ethics Conference at USF in March 2004.

Just prior to transferring to UF after being accepted in the JHMP, Jay spent a summer in Manhattan after being one of thirty-six students accepted in the NYU Summer Undergraduate Research Program.  Dr. Edward Fisher accepted Jay into his lab to work on a project involving foam cells.  The project‘s main purpose was to use a gene assay to determine which genes are activated during the transdifferentiation of mouse smooth muscle cells into foam cells.

During medical school, Jay became particularly involved in the Equal Access Clinic, a student run clinic that provides free care to the residents of Gainesville.  He also became quite involved in the White Coat Company, a student run theatrical group that was created in 2005 to perform various plays for the Pediatric Heme/Onc Ward in Shands.  In 2007, Jay played Rafiki, the blue-butted mandrill from The Lion King.  He enjoyed the experience so much that the next year, he played Lumiere, the French Candlestick in The Beauty and the Beast.

However, of all of his medical school experiences, the most memorable were the overseas medical mission trips he was able to attend.  In 2007, he participated in DR Salud, a student run medical mission trip that went to the city of San Francisco de Macoris in the Dominican Republic to treat the local population.  In 2009, he joined his fellow student, Beryl Greywoode, in Freetown, the capital of Sierra Leone, in an independent study rotation to reduce infant mortality.

Jay’s first exposure to neurosurgery came through a lecture given by Dr. William Friedman during one of the Junior Honors Seminars.  Dr. Friedman’s eventually became Jay’s mentor and helped him published a paper in the Journal of Stereotactic and Functional Neurosurgery on the use of radiosurgery for the treatment of vestibular schwannomas associated with neurofibromatosis type 2.  In addition to allowing the flexibility to pursue outside interests, the Junior Honors Year helped Jay establish contacts that he maintained throughout medical school.

Back to Former Student Profiles